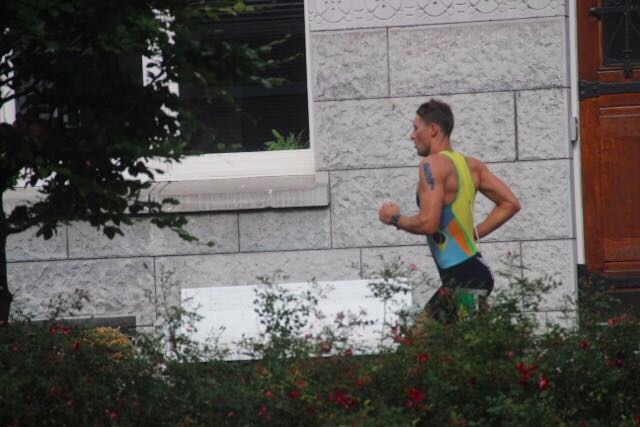 Today we’re here to report about the Finals in Rotterdam. Everything about that race was tough: the weather, the course, the competitors. It was the same usual suspects, with varying degrees of disability (and unfairness in some cases as we know).

After a smooth 10 hour flight from LAX to Amsterdam, I met with Team Brazil in the airport and we drove to Rotterdam. Beautiful 2 hour drive through green fields, a lot of cattle and windmills. The whole week we were there, weather was pretty grim: cold, windy, rainy. I was excited because we do not see much rain during summer in SoCal (actually we see NO rain!)

Training proved hard prior to the race because of weather, but then we worked out at this beautiful gym and also went to a nice swimming pool.

On familiarization day, the team was ready to swim & ride, but the wind and rain were so crazy we decided to not do the ride –those who went said it was pointless, since they couldn’t really ride fast and the wind knocked several athletes off their bikes.

Come race day, I was nervous because it is the most technical course I have ever done, and I hadn’t ridden it at all. Plus the fact that it is so cold they had to postpone the start of the race (to let it warm up a bit), it’s raining, a little windy and it’s all cobblestones. Pretty much everything I DON’T have to train at home.

Well, I had nothing to loose and I went all out. Who knows, maybe it would have worked and I would do better than other races?! But… no, I didn’t do so well. With that high level of competition, and a lot of the athletes being used to those conditions, it was not a good combo and I finished 9th.

Still, my overall PTS2 (my category) World Ranking position at year’s end (after this race) was 9th as well. Top 10 in the world? –I’ll take it. And I improved from last year’s (which was in the same location), both in the run and bike. I took my road bike this year, there’s so many turns there was no need for a time trial bike. Plus I put way less pressure on the tires -only 80psi instead of 120psi, so my chain didn’t fall not even once (compared to twice during the race last year).

There’s still a lot to improve, coaches were still asking more of me, but the fact is that I am still improving, putting in the work and happy with it.

Thank you to everyone that is supportive of me and Team PossAbilities. It takes a village.