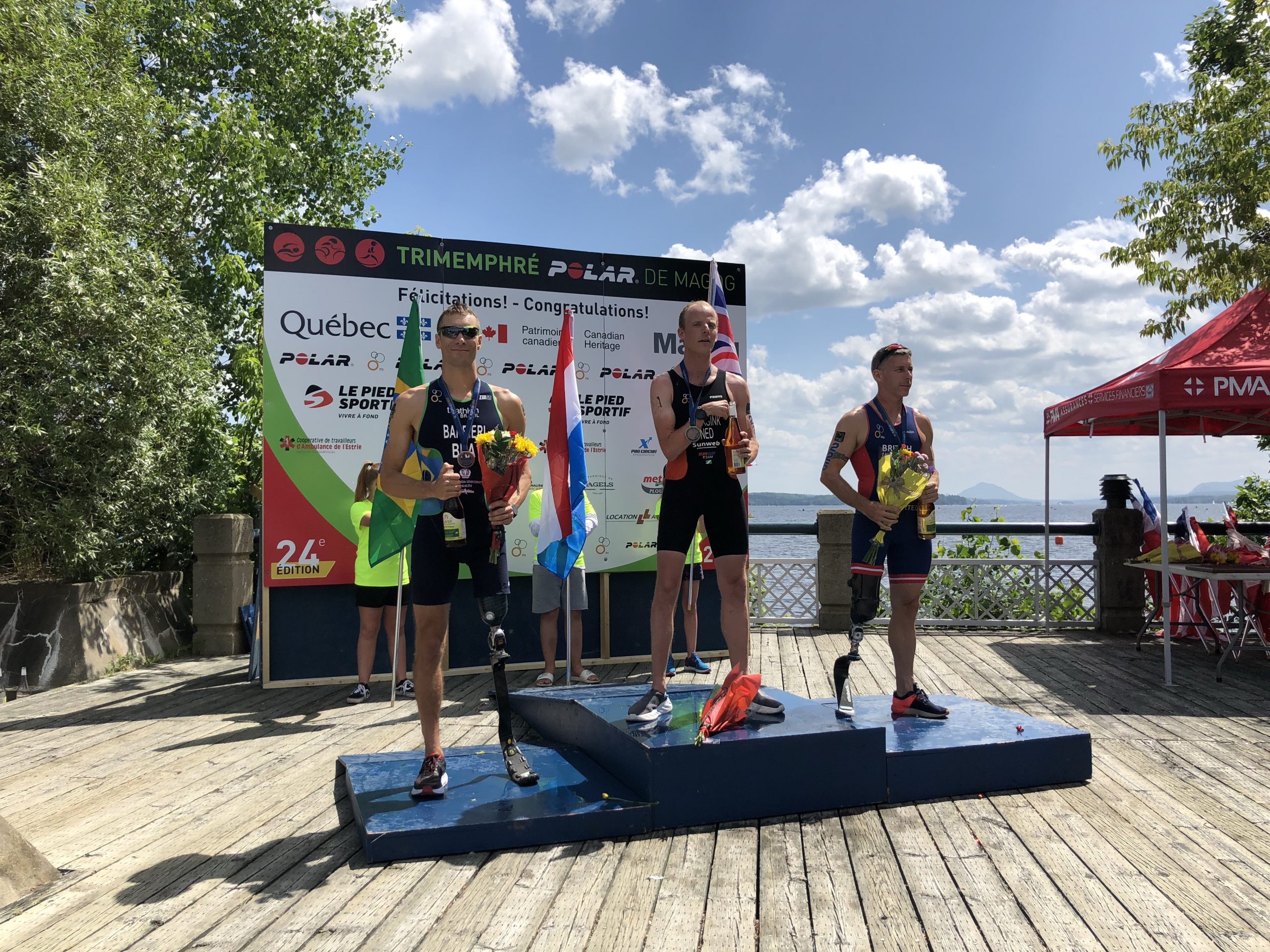 Greetings fellow readers, this is a great story… it could possibly be my last race as a professional triathlete.

I was super excited to see a new part of Canada, the French part. See my friends from Brazil, brush my French a little bit, maybe eat some croissants!

To get there, a total of 3 flights were in order. After the 1st one, my stomach felt weird and I had to run to the bathroom! It was ugly, and I wondered if it was something I ate at the airport… anyways, had to rush to my second flight. I proceeded to “destroy” the plane’s bathroom, it was a very unpleasant flight. By the end of the 3rd flight I was SO weak. Then I found the bus I needed to board in the airport, 1,5 hour sleeping on that one. There were no cabs or Ubers in the rural area I was staying, thankfully a great soul gave me a ride on his SUV (it had to be, to lug all my stuff!) My hotel was far from the Brazil delegation, because I didn’t have a car to drive around. Because I would be using my bike to move around I chose to stay closer to race site.

Unbeknownst to me, Karina and Stella were sh***ing their brains out back home also. My brother had to cancel work and come stay with them to help. So apparently it was a nasty virus we got back home, from Stella’s school or somewhere else…

Finally at the hotel, I actually slept something like 16 hours, and woke up feeling better, but really weak. Thank god the Italian team was staying there also and they welcomed and made me feel at home, sharing their meals like a family, everyone sitting together at a long table, just beautiful! Also buying supplies and a lot of Gatorade at the store for me. God Bless the Italians!!!

Training was ugly, because of my weakness. I didn’t train. Didn’t run or biked much. Went for a swim the next day, a day before the race.

On race day, all I hoped was to finish the race to collect points and prove to the Brazilian federation I did race to justify my salary. Otherwise I would have to race somewhere else, again out of my own pocket.

Right before the race, I was focusing on just not puking or sh***ing myself in the water (or after). Any pressure to do well was off the table. Maybe because of that, for some weird reason, once I started on the swim and felt my energy coming back to me, I was able to imprint some power, felt like my body was responding and holding its bowels closed!

Maybe it was the adrenalin of the moment, I don’t know what! All I know is that I was able to fight hard on a tough cycling course with a lot of hills, a train track on the road to hop over coming downhill at close to 40mph (did it 3 times, so fun! –some people didn’t have the same luck and ended up in the hospital on that same location). The run was just keeping it simple and enough to not let some of the guys pass me.

The end result was a podium, 3rd place!!! I was very proud of myself, and was the only non wheelchair guy from Team Brazil that podiumed! Funny that they didn’t pay for my travels…

Like they say in Brazil, “I finalized my career with a golden key”, or maybe I should say this is the cherry on the cake?

Anyways, Thank you Team PossAbilities for your support always. Thank you Team Brazil for your support always. To all my friends that I traveled and raced and housed together. Thank you ITU and Paratriathlon federation, for an excellent work you all do. I’m just not going to miss your politics. Or maybe that’s an International Paralympic Committee thing. I don’t know, we don’t discuss politics and I don’t care about them anymore. They cut our category. Sayonara to them, thanks for nothing.

It’s been a wonderful journey and I’m so grateful!