The Tour of America’s Dairyland (ToAD) is the largest competitive road cycling series in the U.S. It hosts eleven straight days of racing throughout Southeast Wisconsin. The tour was started in 2009 and extends the legacy of multi-day bike racing that first started in Wisconsin in 1969. Handcyclists race four of the eleven days with the third day being the Criterium National Championship. This year, the racing was as competitive as ever. I was feeling good and had solid results, just off the podium, for the first two days. The third day was the big day. My strategy was to go for it! Rather than be more strategic and sit back a little at the start and see how things play out, I decided I was going to go out with the fastest from the start. This wasn’t just a random strategy. I had discussed it with my coaches and we agreed that this was my best shot for a win. I started out strong and was feeling great…until I wasn’t. The term is called “blowing up”. It’s basically like “hitting the wall”, but in cycling terms. I went out too hard and too fast…and spent the rest of the race just trying to recover. Good strategy…poor execution. In retrospect, I wonder if the right strategy. Given the end result, I’d say no. However, sometimes you have to just go for it to see where you are at as an athlete. It was a good test and a great learning experience. The lessons learned with definitely be applied to my next race as I strive to be at the top of the podium.

Good news got an invite to my first talent ID camp for the U.S. national team read more

Hi Everyone!I'm fired up about my first race of the season!   I travelled to Arizona to the Valley... read more 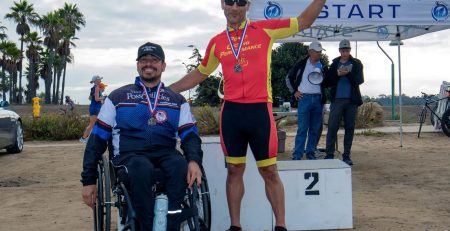 I closed out my racing season on Sunday October 14th 2018 by earning the Fiesta Island 20k Individual Time... read more

It has been an amazing month. 7 races over a 10 day period in 2 different states. I made... read more

The Para-Cycling Road National Championships Nationals was a great experience for me this year. I traveled to Salem,... read more

One of my favorite events of the year with PossAbilities is not a race at all. The Celebration Dinner,... read more

How Long Did it Take You?